The War on Democracy 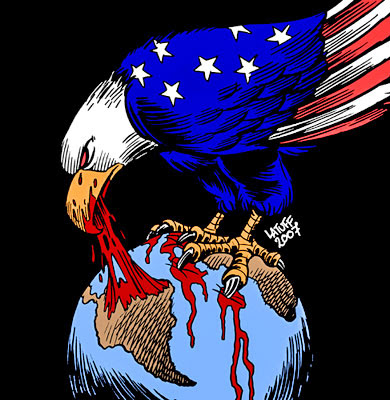 The War on Democracy is perhaps John Pilger's finest film, it details the continuous war fought by the United States against the people of Latin America and features an interview with Hugo Chavez.  The the following description is taken from Mr. Pilger's website:

'The War On Democracy' (2007) was John Pilger's first for cinema. It explores the current and past relationship of Washington with Latin American countries such as Venezuela, Bolivia and Chile.

Using archive footage sourced by Michael Moore's archivist Carl Deal, the film shows how serial US intervention, overt and covert, has toppled a series of legitimate governments in the Latin American region since the 1950s. The democratically elected Chilean government of Salvador Allende, for example, was ousted by a US backed coup in 1973 and replaced by the military dictatorship of General Pinochet. Guatemala, Panama, Nicaragua, Honduras and El Salvador have all been invaded by the United States.

John Pilger interviews several ex-CIA agents who took part in secret campaigns against democratic countries in the region. He investigates the School of the Americas in the US state of Georgia, where Pinochet’s torture squads were trained along with tyrants and death squad leaders in Haiti, El Salvador, Brazil and Argentina.

The film unearths the real story behind the attempted overthrow of Venezuela's President Hugo Chávez in 2002 and how the people of the barrios of Caracas rose up to force his return to power.

It also looks at the wider rise of populist governments across South America lead by indigenous leaders intent on loosening the shackles of Washington and a fairer redistribution of the continent's natural wealth.

John Pilger says: "[The film] is about the struggle of people to free themselves from a modern form of slavery". These people, he says, "describe a world not as American presidents like to see it as useful or expendable, they describe the power of courage and humanity among people with next to nothing. They reclaim noble words like democracy, freedom, liberation, justice, and in doing so they are defending the most basic human rights of all of us in a war being waged against all of us.'

Just to give you a feel for it, here are some quotes from people interviewed in the film. 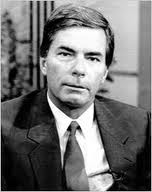 In the CIA we didn't give a hoot about democracy. I mean, it was fine if a government was elected and would cooperate with us, but, if it didn't, then democracy didn't mean a thing to us, and I don't think it means a thing today.” 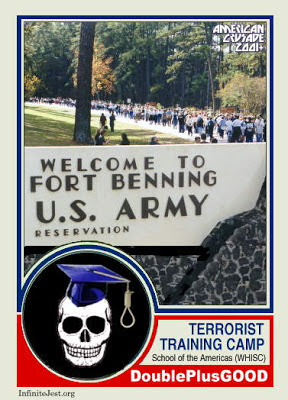 “The doctrine that was taught was that if you want information, you use physical abuse you use false imprisonment, you use threats to family members, you use virtual any method necessary to get what you want.”

“If there's someone you don't want, you kill them. If you can't get the information you want, if you can't get that person to shut up or stop what they're doing, you simply assassinate 'em and you assassinate 'em with one of your death squads.”
Major Joseph Blair, Instructor at the United States School of the Americas 1986-89
(No image available). 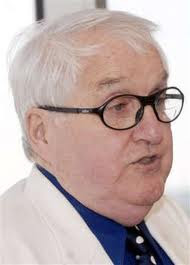 “We'll intervene whenever we decide it's in our national security interests to intervene, and if you don't like it' lump it. Get used to it world – we're not gonna put up with this nonsense. If our interests are threatened, we're gonna do it.”
Duane Clarridge ex-head of the CIA's Latin American division

and finally, from a different perspective:

“I came out a totally, um... ..different person... but also with new eyes... and... more attuned to the hurting, the brokenness, the oppression, the deceit of my government.”

“I've heard people say that what happened in Abu Ghraib is an isolated incident, and I have to just shake my head and say, “Are we on the same planet?” You know, “Aren't you aware of our history?” You know, “Isn't history taught in the classroom, about the role of the US government in human rights violations?”
Sister Dianna Ortiz, talking about her experience in a United States backed Guatemalan torture chamber.


Again, I'm not linking to this film to support Chavez or socialism etc.  I'm linking to it to cast whatever light I can on the real state of affairs in the world, in this continuing age of empires.


Link to the film on John Pilger's website:
http://johnpilger.com/videos/the-war-on-democracy